Legends hold that Udumbara flowers blossom only once every three thousand years. Remarkably, they have been seen blossoming in recent years, bringing the legend to life for many in various regions of the world, to the great delight and surprise of the thousands who have seen them.

Udumbara blossoms were first recently seen in South Korea in 1997. The flowers were subsequently found in Mainland China, Hong Kong, Taiwan, Northern California, New York, and Texas. What does the blossoming of Udumbara flowers mean? 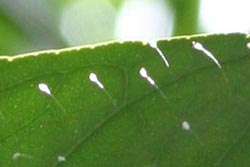 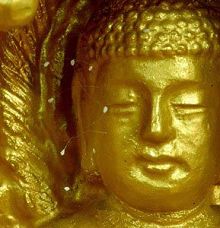 Udumbara flowers found on the face of a Bodhisattva statue in the Sumi Zen Temple in Suncheon, South Korea.

According to the Buddhist sutras, the Sanskrit word “Udumbara” means “an auspicious flower from heaven.” Volume 8 of the Buddhist scripture Huilin Phonetics and Interpretation says, “Udumbara is the product of ominous and supernatural phenomena; it is a celestial flower and does not exist in the mundane world. If a Tathagata or King of the Golden Wheel appears in the human world, these flowers will manifest due to their great virtue and blessings.”

According to Buddhist scriptures, the Holy King Who Turns the Wheel, like a Buddha, embodies 32 manifestations and seven treasures. He is an ideal king who rules the world by turning the Wheel that rectifies the Dharma through justice instead of by force. Regardless of one’s religious affiliation – Buddhism, Christianity or any other – anyone who offers compassion to people will have the opportunity to meet the Holy King Who Turns the Wheel.

Sukhavativyuha Sutra (or The Sutra on the Buddha of Eternal Life) recorded that “people will discover Udumbara flowers to be an prophetic sign.” The blossoming of Udumbara flowers, a rare event that happens only once in three thousand years, is a prophetic symbol.

Since 1992, Mr. Li Hongzhi, who with his teachings of Falun Dafa and the principles of “Truth-Compassion-Tolerance,” has made it possible for more than one hundred million people to cultivate themselves, to become better people, to free themselves from the torments of illness, and to walk the path of returning to their true selves.

Udumbara flowers have blossomed following the dissemination of Falun Dafa, which has reached people in over eighty countries worldwide.

The Chinese Communist regime-controlled news media in China have for the first time reported the blossoming of Udumbara flowers. The Communist regime seems to thereby silently admit the truth of the Buddhist scriptures, and acknowledge the existence of Buddha. This is contradictory to what the they have propagated about “superstition” and “atheism.”

However, the regime has become quite fearful since learning of the discovery of Udumbara flowers on the mailbox of Falun Gong practitioner Shen Zhaohui in Dehui City, Jilin Province. Communist officials ordered that Shen’s home be ransacked and Shen arrested. The regime’s fear is related to its bloody tyranny of dozens of years and its persecution of Falun Gong.

In June 2006, a gigantic stone that had split into two pieces was found in Pingtang County, Guizhou Province. The right surface of the stone showed six gigantic Chinese characters spelling, “Zhong Guo Gong Chan Dang Wang” (meaning, “Chinese Communist Party Perishes”). This stone is thus called Characters-Embedded Stone, which was determined by experts to have formed 270 million years ago. It had tumbled down a mountain and cracked open five hundred years ago; it could not possibly made by man. Ever since the CCP’s inception of the persecution of Falun Gong, the CCP doomed itself to collapse. The Characters-Embedded Stone is simply the verdict of the gods regarding the CCP.

The blossoming of Udumbara flowers signals one of the various celestial changes. Looking back at history, people might discover that many prophecies are related to today’s Fa-rectification. For example, a book of prophecies book called Notes Left by Ge An (Gyeokamyurok), by Mr. Nan Shigu (Nam Sa-go, also called Ge An,1509~1571), came to people’s knowledge in 1986 in South Korea. This is a book relating fantastic miracles. The book describes that the “Lord of All Heavenly Kings,” namely, the Holy King Who Turns the Wheel (people also call him Buddha Maitreya, or the Great Sage), would come to the human world to spread a great law.

In the Plum Blossom Poem, Mr. Shao Yong of the Southern Song Dynasty revealed important heavenly secrets about the opening of the gates of heavens; gods and Buddhas making oaths to come to the earth with Lord Buddha; the spread of Dafa, and the renewal of the cosmos.

The Back Pushing Diagrams prophecy by Li Chunfeng and Yuan Tiangang Inscription Prophecy in Tang Dynasty, the Pancake Song prophecy as well as the prophecy of “Stone Tablet Inscription in Taibai Mountain of Shaanxi Province” by Liu Bowen during the Ming Dynasty, and other prophecies – all of these tell a similar story.

The Book of Revelations in the Christian Bible foretells that the “Lord of Lords” will rise from the East. Another prophetic text is that by Nostradamus in his “Centuries.”

The devastation of the South Asia Tsunami at the end of 2004, as well as tears or blood falling from holy statues around the world – these phenomena also warn people of the coming of great changes. All prophecies are important heavenly secrets that exist for the Fa rectification.

Follow Heaven’s Will and Stay Far Away From Evil

On November 18, 2004, The Epoch Times newspaper began publishing a series of editorial articles entitled the Nine Commentaries on the Communist Party, revealing the tyrannical and bloody history of the CCP’s rule – its crimes against the nation and against humanity, and the persecution of Falun Gong practitioners.

The Epoch Times published a solemn statement and compassionately told the Chinese people that the heavens will eliminate the CCP, that people should break away from the evil CCP, erase the Mark of the Beast [which refer to oaths people made when they joined the CCP and its affiliated organizations], get away from the catastrophe, and rescue themselves. The Epoch Times has urged people to make the “three withdrawals” (withdrawing from the Communist Party, the Communist Youth League and the Young Pioneer).

The Nine Commentaries on the Communist Party has prompted more than twenty-seven million Chinese people to bravely publish their withdrawal statements on an Epoch Times’ website that was specifically established for people’s withdrawal from the CCP and its affiliated organizations. By acting this way, these people have been in accord with the heavenly wil, followed the advice of the gods, erased the mark of the beast, stayed far away from the evil, saved themselves, and walked toward new futures.

Falun Dafa is flourishing around the world; a great and fortunate thing for mankind; and reason for Udumbara flowers to blossom once again!